For the past few months I have been navigating through a new world called minimalism. I wanted to give the lifestyle a shot because of the positive impacts it could have on my life.
These impacts include:
Since Covid-19 struck, many people have started cleaning their houses and de-cluttering their spaces. This is not exactly what I'm doing. And this is not a one time thing where I do the full on spring cleaning fad and I'm done. No. This is a mindset I am trying to practice every single day.

Not only am I practicing minimalism; I'm also applying Eco-friendly and Eco-conscious practices to my life style as well.  While I'm not where I want to be yet with my minimalist and Eco-friendly lifestyle, here are some things I noticed when switching over.
The hardest part for me right now is going through my art studio. But I'm taking it day by day. Somethings are harder to part from. But I'm allowing myself to be kind to myself and not rush the process. When it's time for me to part from what ever it is I want to part with, I know it had brought me happiness in the past. There will be days I look around my space and there is nothing to part with. Other days I open my drawers and go, "I haven't touched this in a long time. Let's give you away to someone who will find use for you." I just go about it day by day. Little by little.
Posted by rahcomics at 10:11 PM No comments:

To become a better children's book illustrator and writer, I have been checking out books from the Library and study three books per week and choose which one is the best out of the three.

This weeks theme is Vikings. I'll tell ya, finding picture books with Viking and Old Norse themes was not easy. Not many are published for some reason. The three books I found and chose were:

YO, Vikings'! by Judith Byron Schachner

Arthur and the Golden Rope by Joe Todd Stanton

and The Littlest Viking by Alexandra Penfold. Illustrated by Isabel Roxas.

To keep it short, YO, Vikings'! is a story about a girl named Emma who is assigned a project to research the great explorer, Erik the Red, and present her research to class. Emma becomes obsessed in this new world of Vikings, and dreams to have a Viking ship for her Birthday. It was obvious this book was written to teach children a bit about Vikings. It did it uniquely through a young girls eyes. I can see a child relating to the main character when it came to finding new interests and passions. The characters' were well developed and the world building was solid. I did find the illustrations a bit messy. Some pages the characters were appealing, other times they were not. There were also illustrations where the anatomy was off. The arms got too short or the torso got too long. Another thing I noticed was the dragon head on the viking ship was more of a Chinese dragon. While the ship was colorful and fun, if the point of the book was to educate on viking culture, it would have been a better choice to chose a dragon head that looked like something the Vikings would have carved. But that's more of a nit-pick thing on my end. Now for the story. I found the text to be really long and some details unnecessary for the recommended age range (5-9) based on Amazon.com. During Emma's research, Erik the Red never pops up, only Viking lore and culture. Almost like the point of the assignment was forgotten. While it still had a solid plot with a beginning, middle and end with a goal achieved, I felt the story could have been told simpler.

Arthur and the Golden Rope

This story has fantasy elements and doesn't have Vikings, but instead Norse Gods and Mythology. The tale focuses on a young boy named Arthur who loves going on adventures. The evil wolf Fenrir attacks his town and destroys the giant flame that keeps his town from freezing over. Arthur searches for the Norse God, Thor, to relight the flame with his lighting, but Arthur must first help Thor capture Fenrir by finding ingredients to forge the Golden Rope. The story introduces the World Tree, and Gods and Goddess such as Freyja, Thor, Baldr and Tyr. It's a beautifully illustrated book with appealing character designs and use of color and lighting for mood. The story was strong and the character's goals were clear. He faced challenges to find the items to make the Golden Rope and had to face the final beast, Fenrir, at the end. Everything was put in the book for a reason. I did find that the pacing of the story was slow and calm. Not a complaint, just something I noticed. Sometimes slow pacing is nice. Maybe for the action scenes it could have been a tad bit quicker. All in all, Arthur and the Golden Rope was a beautifully told story with wonderful artwork that should be applauded.

Last but not least, The Littlest Viking. This simply illustrated book was truly a gem. I didn't expect much from this book, but man was I wrong. The character designs were simple, but their shapes, colors, and textures were fun to look at. There weren't any crazy backgrounds, in fact hardly any backgrounds. Most of it was characters against a white page. But it worked really well. What surprised me was the story, it was so simple, but so modern. Any kid from any era could recognize it. The littlest Viking Sven was no longer the littlest viking when a baby sister comes into the picture. He loved telling stories and loved it when the other Vikings listened to his tales. But when his baby sister was born, the Vikings had no time for his stories. But when he noticed that his new sister listened to his Viking tales, he realized it was okay not be the littlest viking, because he's got the best audience of all, his little sister.

Out of all three books, The Littlest Viking I felt was the best out of all three. The art and story was simple and cute. It was relatable, and so fun to read over and over. The topic was timeless and won my heart immediately.

Posted by rahcomics at 10:43 PM No comments:

Hello Followers!
On September 30th, next weekend, I will be tabling at RICHMOND ZINEFEST in Virginia. It's free and open to the public. Sorry that I don't have a picture to go with this, but here is the event's website link for more information.

Posted by rahcomics at 10:29 PM No comments: 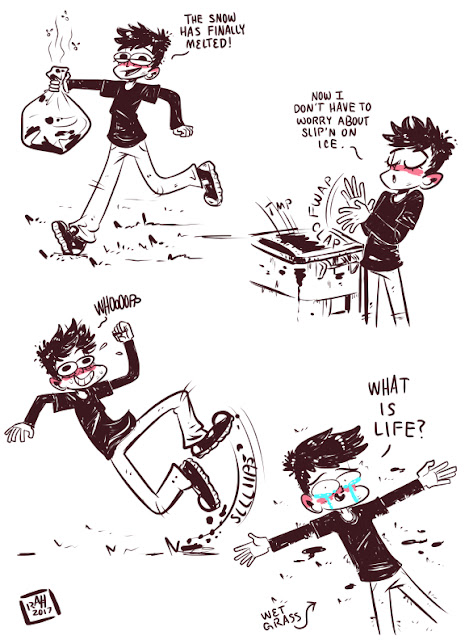 This was drawn in March. This happened in March. I seriously need to post stuff on this blog every once in a while.
Posted by rahcomics at 10:57 AM No comments:

Recently, I've been into traditionally inking my illustrations and comics with India Ink, Speedball nibs, a synthetic and a Princeton Bamboo brush (for large black spots). I also use Sakura Micron and Copic Multiliner pens for some details I can't get with the size nibs I currently have. Here's a peak what I'm currently working on. Though I can't show much or explain what this is for yet. Also, sorry for the low quality pic.

Posted by rahcomics at 9:29 PM No comments:

Sometimes I forget this blog exists. Here are some mini comics I created in my sketchbooks this year. As you can see, my art has been developing between the time I drew these two comics.

Posted by rahcomics at 1:15 PM No comments:

If any of you have been following me, I have changed most of my blogging to Twitter and Tumblr. I also have been working on a fully colored webcomic. But every once in a while I may post something here.

I never had a grilled pb&j until last week.
Posted by rahcomics at 2:45 PM No comments: 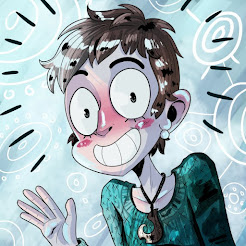 In 2014 I graduated with a BFA in Animation from Savannah College of Art and Design. I'm currenlty a freelance children's book illustrator and a Viking. I also run my own webcomic when I'm not freelancing.

Also on the Web